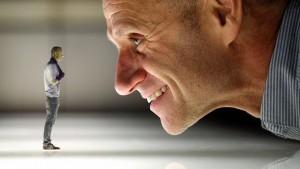 LONDON, ENGLAND – OCTOBER 08: Journalist and presenter Evan Davies poses with a 3D printed model of himself in the exhibition ‘3D: printing the future’ in the Science Museum on October 8, 2013 in London, England. Mr Davies’ model features his arm in a sling due to him being scanned in August 2013 whilst recovering from a broken wrist. The exhibition, which opens to the public tomorrow, features over 600 3D printed objects ranging from: replacement organs, artworks, aircraft parts and a handgun. (Photo by Oli Scarff/Getty Images)